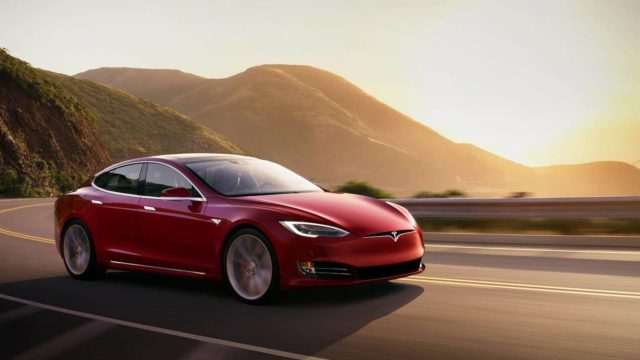 The brand new Jaguar I-Pace is an all-electric, 400 horsepower performance crossover with a range of more than 300 miles and unique styling possible only in a car without a traditional engine. It’s nimble, well-built, grounded and responsive with a kind of immediate torque that will give any driver a thrill. 4

As it rolls toward inevitable “Green Car of the Year” honors around the world, it’s earning accolades and nicknames ranging from “groundbreaking” to “game-changing” to a moniker that would’ve seemed impossible and irresponsible even six months ago: “Tesla killer.” It seems the major automakers are learning to do what Tesla does better than Tesla.Once the darling of automotive enthusiasts and environmentalists alike, Elon Musk’s company finds itself at a critical crossroads midway through 2018. When Tesla’s seminal Model S started shipping in 2012, industry experts, tech enthusiasts and climate change activists embraced the automaker as the future of transportation. Six years later, Tesla teeters on the electron’s edge between collapse and profitability.

When Musk chose Nikola Tesla as the namesake for his ambitious electric vehicle effort, he no doubt sought to capture the world famous inventor’s mythos of stunning innovation and limitless imagination. But, there was another side of Tesla, the man—an inability to secure the real world resources needed to prove his theories due to an impractical understanding of business.

With every mounting production snag and financial stumble, time will tell if Musk’s flagship company has too much of Tesla’s dark side to live up to his once-promising legend. Tesla’s current run of problems began this past March with a power-steering recall for more than 123,000 Model S sedans. That same month, a Model X running on the car’s Enhanced Autopilot autonomous driving system hit a highway barrier in Mountain View, California—killing the driver. As the fifth accident and the third death associated with Autopilot, the tragedy got Musk in hot water with the National Transportation Safety Board when Tesla discussed details of the incident publicly during a federal investigation.

Though automotive industry analysts gushed over the oncoming Model 3 when it was announced in 2016, Tesla continues to experience constant production problems and delays on the more affordable, consumer market machine. The company’s own statistics report more than 300,000 buyers paid a deposit of $1,000 to reserve the Tesla 3 within a week of its introduction.

As of March 2018, Tesla delivered less than 10,000 Model 3s, though its factory completed its targeted 5,000 vehicles per month mark for the first time in June 2018. On June 28, Tesla emailed everyone in North America who put down that $1,000 deposit, telling them that they could now order their cars for an additional $2,500.

All of that drama led Moody’s credit rating service to downgrade Tesla, while Goldman Sachs (the car builder’s main underwriter) predicted a fall for Tesla’s stock value. The latter’s analysts report that Musk’s company might require up to $10 billion in new capital by 2020 to fund the company’s struggling operations.

And this bad press is only on top of Musk’s own consistently erratic public behavior. Whether via social media or public appearances, the Tesla founder rarely misses a chance to antagonize his critics. He fired back at Goldman Sachs for is reports. He deflected negative media reports on factory conditions by calling Ford’s Dearborn home “a morgue.” He issued multiple bizarre April Fool’s tweets and attacked journalists who reported on possible management changes.

Most recently, the travails of a Thai youth soccer team trapped in a flooded cave brought on Musks’s most peculiar social media rants with a direct impact on Tesla’s finances. With time running out on the team and rescue efforts struggling to reach them, Musk brought his small, in-house designed submarine to the scene and claimed it would save the team one boy at a time.

British cave explorer and diver Vern Unsworth played a leading role in the team’s eventual rescue, and he publicly described the submarine offer as impractical and a PR stunt. Musk’s social media response labeled Unsworth “Pedo Guy,” insinuating the rescuer was motivated by a sexual interest in children rather than a desire to save lives.

While it’s fair to mention Unsworth hardly took the high road when saying Musk could “stick his submarine where it hurts,” Musk’s actions brought on a promise of a defamation lawsuit from Unsworth and a 4 percent fall in Tesla share prices.

It’s historically rare to see any major corporation’s prospects fluctuate as rapidly and dramatically as Tesla’s, especially when you consider how successfully Musk’s creation entered the four-wheel fray. According to Jeremy Barnes, long-time industry veteran and a communications consultant for automakers ranging from Jaguar and Aston Martin to Ford and Mazda, the dark clouds gathering over Tesla’s Palo Alto, California roof shouldn’t wash away Musk’s early accomplishments.

“There’s no question Tesla is innovative —arguably the most innovative, clean-sheet-of-paper company we’ve seen in generations,” Barnes says. “For years, the ‘experts’ said it was impossible to build a 300-mile battery EV — but Tesla proved them wrong.”

“The problem for mass acceptance of EVs, they said, was there was no charging infrastructure, so Tesla built their own country-wide network. Then they said that people didn’t want to drive EVs because they were boring and were just making an environmental statement, but Tesla’s Model S was stylish, fast and an immediate success.”

Anton Wahlman, financial and automotive industry analyst with penchant for electrification, was once a fan of Tesla’s pioneering spirit, too. “I come at the company as an analyst while covering telecommunications and computing,” Wahlman explains. “I stumbled upon it while living in Palo Alto near Tesla’s campus. I was intrigued by a simpler solution car with fewer moving parts. California seemed bullish for the Model S and many people around me were eager early adopters.”

While Wahlman was once a Tesla investor and saw the company as a home run, he soon had concerns. For example, Wahlman points to the fact that Tesla’s current operations make one product (Model 3) at one factory in one state and in one country. That’s a major concentration of resources and a source of risk for investors.

Barnes sees all of that as a byproduct of Tesla’s big plan style. “They’re ambitious to a fault, speaking publicly about what they’re going to do and when they’re going to do. It’s akin to parents expecting their newborn to be running a marathon two weeks after she takes her first steps.” He adds, “They’re naive to a point, too. The so-called ‘production hell’ they’ve been in has proven that it’s a lot harder to get into the mass-production car business than it seems on the surface. Congratulations to them for making the 5,000 unit goal this month, but the real challenge starts today—and it’ll continue over the next few months and years.”Lauren Fix, nationally syndicated broadcast and print automotive journalist, believes Tesla jumped into the market with too much, too early. “Musk is forward thinking and very creative,” says Fix. “His vision and star power has kept the company alive and gains Tesla much notoriety. However, his manufacturing skills are lacking.” She goes on,“He should have started with reasonably priced mainstream cars, perfected that and created a profit before he expanded production at a loss. His overly ambitious strategy will end in catastrophic failure. You can’t take a loss in every vehicle and make it up in volume. He’s living on carbon credits that may come to a quick end.”

We’ll see whether Tesla is here for the long run. Right now, Ford, Toyota, Honda—they’re all making it look easy compared to Tesla.

And Barnes agrees: “We’ll see whether Tesla is here for the long run. Right now, Ford, Toyota, Honda—they’re all making it look easy compared to Tesla.”

For the first few years of car sales, Tesla rode a wave of popularity with the environmentalist movement. The fans said Musk finally cracked the idea of building an electric car that was both fun to drive and attractive to view—elevating the class beyond clunky hybrids like the Toyota Prius or unworkable eyesore electric rides like the Nissan Leaf.

However, as the global warming crisis fades from headlines and electrified cars become more common, that ecological selling point isn’t the motivator it once seemed. A 2017 study by Simon Fraser University in British Columbia showed traditional concerns (cost, reliability, durability, etc.) overruled environmental concerns for a majority of new car shoppers. Then, a May 2018 AAA study reported a 5 percent increase in buyers who would consider buying an electric car—but the overall number remained at only 20 percent as range and reliability trumped environmental concerns for shoppers.

“Tesla has definitely played to the environmental movement,” Fix explains. “Buyers realize battery power, electric vehicles and plug-in hybrids are not necessarily the answer. The environmentalists are not hearing this information. All they hear is the hype that this is the future of automobiles. In order to power all the electric vehicles environmentalists hope to see on the roads, the infrastructure will require coal, natural gas and nuclear power to support an outdated power grid.”

Meanwhile, Tesla established the market and set the standard for electric car styling, other automakers were watching and planning in an effort to do what Tesla was doing—only more reliably and more efficiently. The I-Pace is exhibit A, armed with a $70,000 price tag and well-established Jaguar/Land Rover build quality that won the New York International Auto Show World Car of the Year award in 2016 (F-Pace).

Wahlman warns that other automakers are not far behind: “They learned from Tesla. Musk was smart enough to build eclectic muscle cars for millionaires. He wanted to crack the high end of the market first because that’s where the buyers are.” He continues,“The competition will do the same. Mercedes-Benz will put out 10 electric vehicles to mirror their traditional line. Audi has its electric models coming soon. By 2020, every Jaguar built will have some kind of electrification. Come 2022, there will be between150 to 200 electric cars available. Other companies will eat up the market share.”