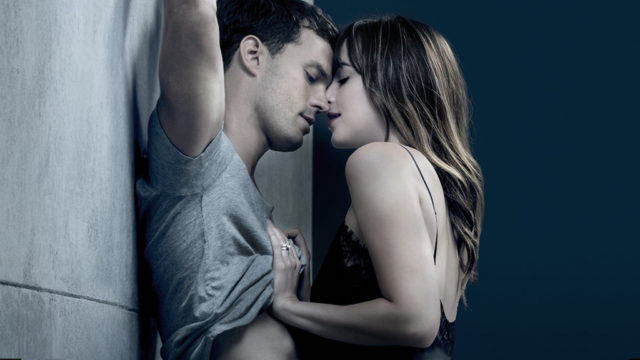 Still, the films represent an anomaly among modern blockbusters. They are not based on a comic book, they take place on planet Earth and feature heavy doses of sexuality that’s not intended for comedic effect. And despite nearly universal negative reviews, the first two films have together managed to gross nearly a billion dollars worldwide, so clearly audiences are buying what these movies are selling. But what impact has this sexually charged franchise had on our culture?

Even if you’ve never read the books or seen the movies, the Fifty Shades brand has reached such a saturation point that it’s been almost impossible to avoid. It was first sold as a dirty secret that then became a cultural touchstone for “kink gone mainstream,” which rubbed people the wrong way who were already steeped in sexually explicit work.

“It just seemed very vanilla,” Sydni Deveraux, an internationally renowned burlesque dancer and nude model, tells Playboy. “I know people that shove rods inside their urethras … This is not kink.”

“People have been choking and slapping each other for hundreds of years,” she adds. “This is not new.”

“I would hope that if someone finds Fifty Shades of Grey to be really arousing … that could serve as a launching point for further engagement with these issues of sexuality and consent.”

Hennessy, a 21-year-old sex worker and writer, who was working as a professional domme when the first film hit theaters, believes that “it’s a franchise that’s capitalized on the suffocated sexuality of predominantly 30-to-40-ish straight, cis, white women.”

“I think it’s quite boring,” she tells Playboy. “But I also don’t need an outlet for my own fantasies when many people pay me to execute them.”

But Gattuso concedes that for some women who may be more inhibited or may be constrained by a conservative atmosphere, material like Fifty Shades of Grey may provide a necessary outlet for sexual expression. “I don’t want to trash something that helps someone figure out their sexuality,” she says. “I would hope that if someone finds Fifty Shades of Grey to be really arousing, and [it] helped open up a space that they really couldn’t explore before, that could serve as a launching point for further engagement with these issues of sexuality and consent.”

“We’re just perpetuating the same toxic parts of masculinity, and teaching the next generation of young boys that that’s how they’re supposed to behave.”

Indeed, consent has been a consistent source of frustration for critics of the series when it comes to the power dynamic between its titular male lead, billionaire businessman Christian Grey (played by Jamie Dornan), and the female subject of his desire, college student-turned-pseudo-concubine Anastasia Steele (Dakota Johnson). A great deal of the narrative centers on Anastasia’s tentative embrace of S&M, which to many readers and viewers feels more coerced than consensual.

This concern has not diminished since the series first made its debut in 2011. In fact, the 2017 London premiere for sequel Fifty Shades Darker was greeted with protesterswho argued that the movie “glamorizes domestic abuse,” and that the Grey character is a “rapist.” This was, of course, just days after Donald Trump, a man accused of sexual assault and misconduct by over a dozen women (claims he has denied), was sworn in as the 45th U.S. president.

It stands to reason that amid the #MeToo movement, this new film debuts during an even more heightened climate of awareness about toxic masculinity and the pervasiveness of sexual violence and manipulation. “It’ll be interesting to see how people will receive this [new] film, and hopefully it’ll spark some good conversation,” says Gattuso.

When Katherine Pheysey, a NYC-based sexuality educator and therapist for people with intellectual disabilities, took several of her clients to a screening of the first Fifty Shades film at the behest of her non-profit employer, an open and honest dialogue was exactly what she was hoping for. In the two-hour conversation that followed the screening, reactions from the group ranged from disgust to disappointment to titters and titillation, but according to Pheysey, the film was a helpful tool to engage individuals who often are only as well-versed in sexuality as the pop-culture images provided for them.

“I think that just because of the way pop culture works, you don’t have time to show the whole story,” she tells Playboy. “There’s often that movie montage of two people meeting in a bar, and then they get to know each other, and then they start doing tequila shots … and then the next thing you know, it’s the next morning, and they’re sitting in bed. And there’s nothing to fill in those blanks.”

Pheysey believes it should behoove Hollywood to start portraying more enthusiastic consent and the use of contraception, to provide audiences with a healthier and more realistic perception of sex. “When you see things like Fifty Shades of Grey, they miss on the important nuances,” she says.

“They’re like, ‘Holy shit, I didn’t know that a you exists,’ because they’re looking at Instagram and seeing nothing but other Charlottes.”

The problem, however, is that when it comes to sex in the social media age, it often feels like nuance is dead. “We’ve come to live and die by social media,” says Deveraux. “Life is actually happening outside of an algorithm, and very few people understand that algorithms are determining their shock and awe and how they react to things. Meanwhile, women are angry, and rightfully so, because there’s so much information online, and more women are talking, and they’re understanding just how unequal things are.”

“Live entertainment is really unique … You can actually transform for a moment, and sometimes for a very long time, [an audience’s] impressions of what is beautiful and what is sexy and what is possible,” she says. “I’m 6’ 2″, I’m 6’ 8″ in heels, the sides of my head are shaved, I have tattoos, and I’m brown, and I’m a weird world wonder to every little white girl who’s named Charlotte who comes to a show. They’re like, ‘Holy shit, I didn’t know that a you exists,’ because they’re looking at Instagram and seeing nothing but other Charlottes.”

And what about men? Not only are they being indoctrinated with a uniform standard of often unattainable beauty, but they are also from a very young age being trained to act first but ask questions later when it comes to sex, a pathology that sadly some feel the Fifty Shades franchise has perpetuated.

And yet, there are glimmers of hope. There’s a case to be made that the demystification and destigmatization of gay culture and sex helped make the world safe for a product like Fifty Shades. It’s also fair to assume that the debates the franchise sparked have helped push important topics into the forefront in a way that’s constructive, albeit in a way that far too often focused on the salaciousness of the content, instead of its substance.

“I think we’re growing more sex-positive generally,” says Hennessy. “We’re learning to talk about sexuality and gender as a spectrum, understanding that things like virginity is a social construct and the patriarchy harms everyone.”

Now, the question remains whether the focus can shift to weightier issues like power: Who has it, how is it wielded and how can it be used in a positive way? “Being sex-positive means that sex is not the moral issue,” says Gattuso. “The way we treat one another is the moral issue.”