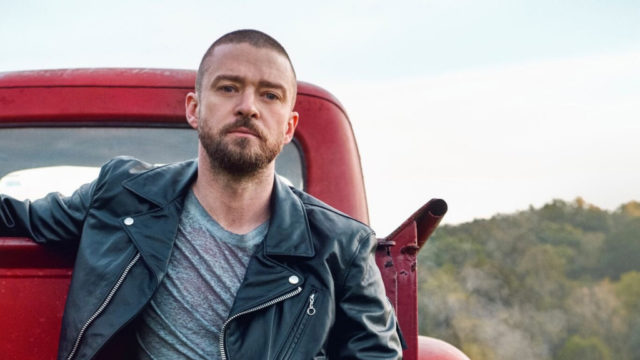 Justin Timberlake unveiled a minute-long trailer for his new album, Man of the Woods,that left us all fucking confused. He is pictured brooding among wheat fields and in forests, running with horses, wearing a tassled leather jacket one scene and a flannel in another.

And then “Filthy” was released and, if you haven’t heard it yet, we’d like to forewarn that is sounds exactly like the old Timberlake, even though he describes this new project as “modern Americana with 808s”. Again, we’re confused.

Playboy is all for reinvention. It’s exactly what Timberlake needs to stay relevant in the music industry after 20 years, but he has always managed to bypass that stigmatic “blue-eyed soul” peg since his oh-so charming NSYNC days, coupled with his ability to align with hip hop titans like The Neptunes, Timbaland and JAY-Z. This “down home” project feels icky because it feels so fabricated—a belief that became even more justified when we received an invitation to the album’s official listening party.

The email stated that it was to be held at New York City’s Skylight at Clarkson Square. The event would be sponsored by American Express (a very rural credit card company), where top-tier Amex VIPs could experience the album early in addition to a handful of media and industry so-and-so’s. Food would be provided by Brooklyn’s Michelin-rated noma (a very rural eatery) and phones would be confiscated prior to the listening.

Upon entry, patrons were forced to surrender their phones to tiny, locked pouches they could hold but not open without a special magnet (a rural way of dodging phone calls). The photo booth setup mimicked a country home, set in a town where the population included only tumbleweeds. Antlers hung from a door to pose alongside, and we could hold a log as a prop. The main area was dynamic, with faux foliage decorating the giant space, accented with chef stations and multiple open bars. A mobile vinyl recording company live pressed copies of “Filthy” to be played only on mobile devices (also very rural). Amex signs were everywhere.

The menu consisted of tiny nibbles like “black garlic, rose oil and ants,” “aebleskiver and grasshopper,” “sea urchin and kelp pie” and “black truffle flatbread.” Timberlake later confirmed the insects sprinkled into the food weren’t real. (Then what were they, Justin?) On night two, Timberlake wore the red beanie from the Woods trailer and an acid washed denim jacket, plus camouflage pants. “This album is very special to me,” he spoke with believable sincerity to the crowd, in front of a barnyard backdrop. We learned then and there that his son Silas’s name means “man of the woods.” This project is named after him.

From that moment, the question of “which came first” could automatically come to mind: Did Justin think “Hey, it’s time to go country!” or “Hey, Silas’s name would make a great name for a country-skewed album!”? Just as we suspected, Timberlake never quite, completely returns to Tennessee on his new album. Man of the Woods at times feels like the halfway house a country star would reach on the road toward pop—like if Taylor Swift or Carrie Underwood thought it would be a great idea to get bluesy at 128bpm before surrendering to songs about being vindicated.

Its 16 tracks sometimes retain the integrity of kneejerk assumptions while other times completely surprises. “Filthy” opens and gives way to a Jamiroquai-sounding “Midnight Summer Jam” that ends with an electronic breakdown. By the next track, “Sauce,” we get into almost rockabilly territory, along with the title track, which is a kind of bluegrass with pop sensibilities. Sexy songs like “Higher, Higher” utilize electric guitars into basslines effectively. “Supplies” brings Timberlake into full-on bouncy terrain with trap influence and an accompanying music video that is a weak attempt to be part of the #MeToo movement.

The album reaches a crossroads upon the appearance of Alicia Keys, who does a little doo wop on “Morning Light,” followed by the moody “Say Something” with Chris Stapleton. From there, the album could have ended a few songs later, but it falls victim to bad sequencing and over-selection.

Still, some great songs are present like “Flannel” and “Montana” (which sounds nothing like the state), along with “Livin’ Off The Land.” The latter is perhaps the greatest representation of what Man of the Woods may have been imagined to be–country sounds paired with hard bass. But much like the ants and the grasshoppers, so much of this album doesn’t quite feel real.

The “real” in question can be mostly attributed to the album’s promotional vehicle. Had we not been trolled into believing this would be the Timberlake’s version of the Nelly and Tim McGraw collaboration “Over and Over,” we might have been able to enjoy it for what it is: an album Justin Timberlake named after his son in which he teases where pop music may be heading.