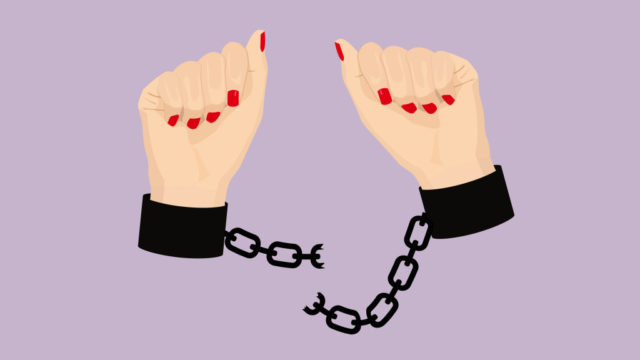 Who decided being single is so bad? Who is the asshole who decided your life is not emotionally fulfilled unless you have somebody to share it with? Better yet, why are the people who oppose such traditional relations so often looked down upon? Here at Playboy, we’re going to offer a different take on cuffing season: Instead of dating somebody during winter months only to ditch them when the heat returns, just stay single. You know, be selfish. Do you.

While there’s still a discernible volume of those who judge, it’s impossible to refute that singledom has become a more appealing prospect among younger generations. “I think that as a society we’ve definitely evolved and don’t pity singles quite as much as we did a few decades ago,” Laura Bilotta, dating expert, matchmaker and author of Single in the City: From Hookups and Heartbreaks, To Love & Lifemates, Tales & Tops To Attract Your Perfect Match, admits. “However, some people still do stigmatize the single life and often stereotype singles as selfish and difficult.”

Not all singles are so harshly stereotyped, Bilotta says, but the older a single gets, the more people tend to judge. “There’s the common belief that if people are single and over 30, there’s something wrong with them,“ she says. “Lots of people settle, early but there are many that want to make sure they’re truly with the right person before they commit.”

Truth of the matter is, single people aren’t all commitment-phobic and incapable of love, oftentimes they prefer to first thrive in other areas of their life through maintaining strong friendships and excelling at work. “Marriage and kids aren’t the only acceptable options anymore,” says Bilotta. “More people are pursuing the life that suits them best, rather than the one that is prescribed to them.“

Millennials have steadily broken the status quo in terms of what we want from life, which normalizes the single lifestyle. For instance, research from online legal marketplace Avvo found that less than half of millennials view marriage as a life goal, and Pew research shows one-quarter of millennials are likely to remain unmarried by the time they reach their 40s and 50s. In fact, American singles now comprise the majority of the population.

Per Bilotta, a big reason millennials choose to remain single is our generation was raised in an age of rising divorce rates and broken homes, which in turn makes them far less likely to buy into the idea of marriage as an institution. “We’ve shifted as a society, and now it’s okay to live together without being married and having kids out of wedlock is no longer taboo,” she says.

Not to mention, women have become exceedingly independent and therefore may not put as much effort toward finding a partner. Moreover, nontraditional lifestyles–open and poly relationships, for instance–have opened perspectives on what partnerships can look like. Essentially, marriage translates as one of the more boring (and unnecessary) options available to us.

But while general interest in getting married is dwindling, Bilotta believes it will always remain a popular option. “There will always be those who believe marriage is important to them and who crave that happily ever after. There’s nothing wrong with that,” she says. “Marriage for some is a source of security that provides a sense of stability and order.”

I can be somewhat of a skeptic in matters of love, so I asked Bilotta if she believes relationships are something people truly want, or–at a time where many dated norms are being challenged–if it’s something we’ve been told we want. She insists everybody craves intimacy, but admits this intimacy doesn’t have to be romantic. Platonic intimacy can be just as powerful. “Relationships come in all different forms, and just because someone doesn’t want to have a romantic relationship doesn’t mean there’s anything wrong with them.“

Besides, being single has its share of benefits. First, the obvious: You can be truly independent and do whatever you want without having to take your partner into account. You can spend your money however you like and travel on a whim without permission. You can explore sex with whoever the hell you want and try new sexual experiences not limited to a single partner.

Moreover, research shows that singles can be quite selfless, as they’re more social than their married counterparts and more likely to help, encourage and socialize with friends and neighbors. They also accrue less credit card debt on average, work fewer hours and spend more time bettering themselves.

In what way does any of this sound bad? It doesn’t. That’s why this cuffing season we’re going against the grain. If you don’t have somebody to cuddle with as the temperatures drop, big whoop. If it’s the cold that’s getting to you, go on vacation. Download an app and find somebody looking for the same no-strings attached partnership as you. Because the best part of being single is that nobody’s holding you back.