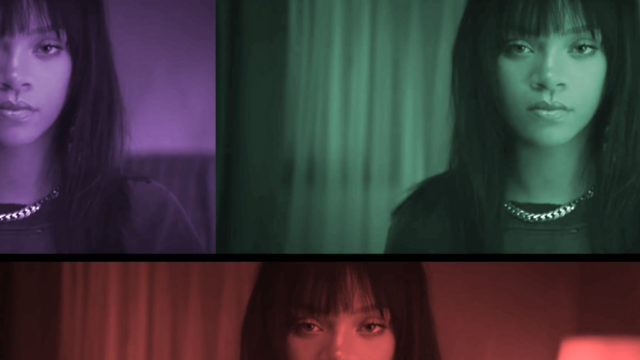 Earlier this month, N.E.R.D. surprised fans by sharing “Lemon,“ the Pharrell Williams-fronted group’s first new music in seven years, featuring a swaggering rap verse from none other than Rihanna. The accompanying video, shot at Del Amo Swap Meet in Compton, opens with the Barbadian pop star shaving the head of dancer Mette Towley before the scene shifts to the latter weaving through a deserted, neon-lit shopping mall. The hypnotic visual was directed by Todd Tourso, who some might recognize as Beyoncé’s creative director, and Scott Cudmore, a Canadian director who’s worked with artists including Feist, Belle and Sebastian, Spoon, The New Pornographers and more.

Whether it’s for a festival headliner or an up-and-coming indie act, Cudmore’s videos are frequently surreal, occasionally meta and unlike anything you’ve ever seen before. In his worlds, fully realized characters break through fourth walls, attend classes at one-room schoolhouses and get shot at by helicopters while attending champagne-soaked pool parties. He’s won multiple Canadian and international awards for his commercial and non-commercial work. Earlier this year, he directed Game Show!, a VICELAND series about a bizarro fictional game show and its down-on-his-luck host.

Playboy Contributing Writer Max Mertens recently spoke with Cudmore over the phone from his home outside Toronto. He’d just returned from Los Angeles and seeing N.E.R.D. play their forthcoming fifth album in its entirety at this year’s ComplexCon. “My wife sent me some reaction videos on YouTube that really made my day,” he says of the public response to “Lemon.” “It’s pretty exciting to see people freak out about it.”

How did you end up co-directing “Lemon”?
My U.S. representation, Good Company, have done a lot of projects with Todd Tourso over the past few years. When they started to develop this one together I got put forward by Jonathan Lia and Brian Welsh to co-direct it with him, and I was lucky enough to get to be a part of it. I’m honored to be a part of it. A video for Pharrell and Rihanna is a massive platform to get to speak from and I don’t take that lightly. It’s a loud platform and a crazy privilege.

Tell me a little bit about the creative direction for the video.
Conceptually, it started with Todd. He had the basic idea and framework for the video worked out before I became involved. He had a treatment written for it and I was asked to write a treatment on top of his treatment, and then what we did was essentially combine those two together. But I would say that the basic core of his idea didn’t change. What I did was bring a different visual direction to the concept that Todd had created.

Were you inspired by any other videos or films in particular?
It’s going to sound odd, but lately I’ve been more inspired by books and writing than any film work. I tend not to look at a lot of other videos and visual media while working on my own stuff for some reason. Making this video I was really thinking a lot about Tibetan Buddhist philosophy, Carl Jung, Joseph Campbell, Ervin Laszlo…stuff like that. Sounds totally weird probably, but you never know how various ideas are going to manifest into imagery, and that’s just the sort of stuff that was driving and inspiring this project for me for some reason.

We’d looked at Kanye’s “Fade” video because we knew we were making something kind of similar, but for me it wasn’t something I was inspired by or thinking about at all (even though I love that video and song to death)—just more as something to acknowledge.

What was more intimidating: directing Rihanna or directing [Pulp frontman] Jarvis Cocker in Feist’s “Century”video?
Neither was intimidating, they’re both really lovely people. I was just honoured to be able to work with both of them.

You got your start working with indie bands. Besides the budgets, what’s been the biggest difference in making the jump to working with high-profile artists?
Being able to execute bigger ideas is obviously the most feasible difference. The art I don’t find a lot of big differences. I’ve done so many low-budget videos that I’m wanting to execute more ambitious visual ideas, and it affords this kind of freedom that you don’t get with a $10,000 budget.

Would you ever do a Lemonade-level visual project?
Absolutely. That’s an interesting thing that’s happening in music videos. It’s been growing beyond the traditional promo—which is meant to identify an artist visually, see what their attitude is like and show their record—into a much more ambitious medium. I’ve always tried to push the envelop of what a music video could be and it certainly doesn’t need to just be a three-minute visual representation of the song. It can be longer than the song, it can involve narrative, dialog, it can be something like Lemonade,which can put all the musical material on that album into one visual piece. Their cultural significance hasn’t changed; in fact, I think they’re getting more valuable as the medium is growing. I think that’s the future.

You’re Canadian, but your video for Wintersleep’s “Amerika” features footage from a Donald Trump speech. Why did you use that and what role do you think directors have in addressing politics in their work?
I wasn’t trying to make a political video and I still don’t see it as a political video actually. It is about human beings and human civilization. On that level, of course it’s political. But for me, it’s about our disconnection from each other, from nature and ultimately from ourselves. This is the sickness of modern culture. That’s why she talks at the beginning of the video about an earlier civilization that was once at one with nature but then became too arrogant perhaps and ended up at odds with their environment and so destroyed themselves.

Donald Trump is almost a living symbol for this and that speech is just such a small-minded, narrow way of seeing the world—completely self-obsessed. Obsessed with the idea of winning as if there is actually somebody to defeat, seeing ourselves as separate from each other, and from nature, rather than as part of the fabric of it. We don’t end at our skin. The more we view ourselves as separate, the sicker we get, the sicker our psyche gets and the sicker the planet gets. Donald Trump is almost an archetypal image of the human ego run amok. I don’t really see it as a political issue in the sense of geographical borders though—a Canadian or an American issue. It’s a human issue. We’re all on this ship together.

Who are the directors who are pushing the boundaries of the medium right now?
I’m really into the stuff that Kevan Funk is doing and Eva Michon is always doing something inspiring and fresh. Her video for [Toronto producer] Harrison [“Right Hook”] is awesome and I definitely haven’t seen anything like it before. She’s got a really clear aesthetic that you can almost immediately identify as her in all her work. Ian Pons Jewell, Daniels, David Wilson, Daniel Wolfe…there are a lot of people pushing the boundaries of the format lately, which is inspiring.

Finally, if you could direct a video for any artist, who would it be?
I’d love to do something really fucking weird for Kanye West. Or Beyoncé. Something where you watch it and go “What the fuck did I just watch?” I mean, I guess Kanye has already done that with the “Famous” video, but I’d love to do one of the next ones.