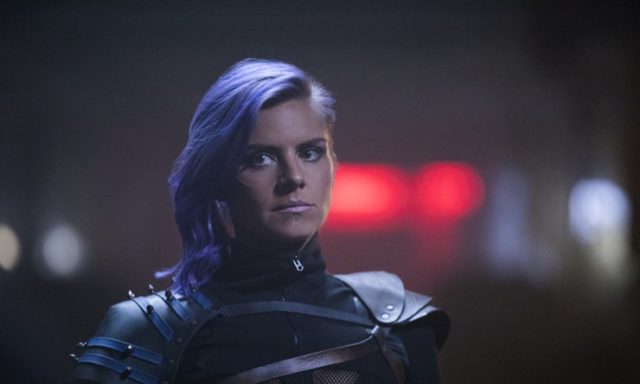 Created by Seth Rogen, Hulu’s new series Future Man turns the world of gaming janitor Josh Futterman (Josh Hutcherson) upside down. After finally beating the top level of his favorite game Cybergeddon, its post-apocalyptic stars, commander Tiger (Eliza Coupe) and her second-in-command Wolf (Derek Wilson), materialize in his room—right at the moment he’s jerking off to a fantasy of her.

Embarrassing moment done, Futterman learns that the game is a recruitment tool for belligerent future soldiers who seek a supreme warrior to help them on a special mission on Earth; specifically, they need to stop the man who cures all diseases as this later leads to the rise of invulnerable super humans who seek to wipe out everyone deemed inferior. The savage Tiger and Wolf think Futterman is their Savior, except he can’t fight for shit in real life. Once their adventure begins, he tries to convince them that he can help while not causing widespread death and carnage. It’s a process.

Rogen has stated that Future Man is a comedy with life-or-death stakes, and that gives the story an unusual feel that pushes it a little deeper than surface nostalgia. At the same time, the show is full of 1980s references. The premise is like The Last Starfighter, The Terminator and Quantum Leap rolled into one, with references to more recent sci-fi epics like The Matrix and Children of Men included for good measure.

At New York Comic Con, Coupe, whose TV resumé includes Happy Endings, Casual,Quantico and The Mindy Project (how many of you just muttered, “Ooh, that’s how I know her!”?), met up with Playboy to talk about her exciting, new sci-fi comedy series, which begins streaming on Hulu on November 14.

You grew up in the 1990s. How did you relate to Future Man’s many 1980s movie references?
I was born in 1981, and I was a teenager in the 1990s, but Back To The Future is one of my favorite movies of all time. It’s so good. They thought of everything. I love that there are so many homages to that and The Terminator [in this].

Were you a geek growing up?
No. I mean, I did love the time travel stuff—Quantum Leap was one of my favorite shows. I’m a big Marvel fan. I like sci-fi stuff. I never really got into Star Wars, but now I love it. When it comes to Star Wars and the new Star Trek, this is all fairly recent for me, like the past 15 years. In Future Man, I have no connection to the videogame stuff. I played Pac-Man legit, but the thing with me is that I have such an obsessive personality that I know if I played video games, it would be creepy because I would keep going and going until I won.

From Happy Endings to Casual you have a penchant for playing strong, independent women who make men cower in fear. How did you channel your inner warrior for this show?
I’m pretty alpha in real life, and I played contact sports as a kid. It was actually difficult to be angry all the time because Tiger is just always on task. It’s fucking hard to sustain that over almost four months of shooting. It was intense for the people around me because I don’t mean to bring it home, but I’m just like “Uhh!” and I’m a total asshole.

Women are stronger and more powerful in general, so don’t try to do it like a man.

So you did bring it home?
It didn’t go over well. It just spills over. You have to maintain it for so long. But my character does soften up towards the end of the first season.

Not to give away a spoiler, but this makes me think of a scene in the show when Futterman walks in on Tiger bouncing on Wolf, which is their way of blowing off steam.
The sex thing is hilarious. That was day one of shooting the series. Derek and I knew each other from the pilot, but then they were like, “Pull down your pants and be violent and detached”—everything I’m not. It was weirdly easy for me. [laughs] It’s great that we never look at each other. We cracked up a ton filming that scene, but we both just go for it. That’s the great thing—I’m with a cast of actors that aren’t making this campy or some sort of spoof. The producers, writers and directors would never let that happen. We all commit as if this is a drama with high-stakes, so even with the sex stuff, we went for it.

Did your experiences filming Quantico help you on Future Man?
I’ve been able to shoot a gun in Quantico. That helped. But this was different because they wanted to make sure the fighting looked very made-up, that you couldn’t attach it to any genre of fighting. We’re from such a different time where we’re fighting from instinct, so there’s no right way to hold a gun, whereas in Quantico, it’s how the FBI holds things and such.

Because your character is so alpha, were there points when you worried about overdoing it?
Many times. That happens all the time, especially in comedy. I have seen some terrible movies and TV shows where I’m like, “Settle down.” I don’t like when women try to out-yell or out-tough the tough guy. Not in the sense of why can’t we—that’s not the point—but rather, just be a strong, powerful woman. Don’t try being a man. Women are stronger and more powerful in general, so don’t try to do it like a man. Do it like a woman and you’ll get further. It’s like, “I’m on point, I’m on target, and I’m going to fucking destroy you. Man or woman, I’m going to destroy you.” In the future, there is no divide between men and women. We’re all equal literally—except I’m the leader because I’m the strongest and best fighter.