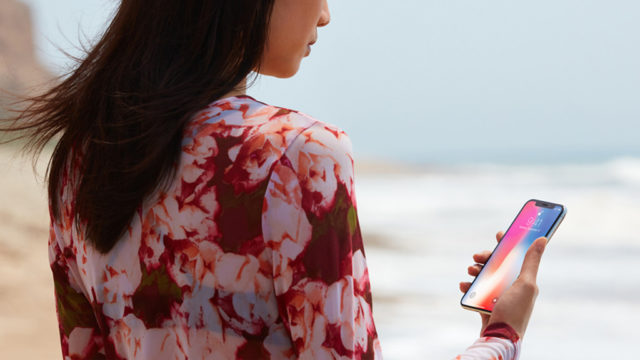 Ten years ago Apple changed everything with its first edition iPhone, a powerful piece of tech not only heralded for its seamless integration of apps but for its minimalist design. It’s no secret that Tim Cook and co. wanted to capitalize on this much-hyped anniversary by changing, well, everything again, this time with the iPhone X. This isn’t a slightly tinkered upgrade with new emojis (though there are new 3D emojis); this is a phone that sets the tone for what the next era of mobile technology looks like.

You don’t have to be an Apple devout to understand the gravity of some of the trending features on the X, which sold out online in minutes and hits store November 3rd. The absence of the home button and fingerprint passcode, a back and front camera with two types of lenses that are just as good as a DSLR, wireless charging and 3D face recognition is just the tip of the iceberg. Did we mention the starting price tag is just under $1,000?

I spoke to MacRumors editor-in-chief Eric Slivka, who has covered Apple’s product launches since the first iPhone—and was up at 3 a.m. last Friday pre-ordering the iPhone X—about who should seriously invest in it and who should wait it out. To give you a taste of where Slivk stands, he reports, “This is the biggest change the iPhone has had since it was introduced ten years ago. I think we are entering a new age and adopting new tech.” So let’s review how much of hype is substantiated versus being just that: hype.

WHY DID APPLE LAUNCH TWO PHONES THIS YEAR?
There is a bit of déjà vu going on; the iPhone 8 and iPhone 8 Plus also launched this fall, which gave some consumers pause before spending a ton of time (money) pre-ordering the iPhone X last Friday.

According to Slivka, there are a few features to note between the versions. “The iPhone 8 is certainly going to be more familiar to people,” he says. “It has the Touch ID fingerprint sensors and the LCD display.” If you’re a creature of habit and want to keep your home button, don’t upgrade. Headphone jack loyalists understand this pain.

If you want to upgrade your phone without losing the home button, the 8 Plus and its new rear camera will woo you. “The 8 Plus has the dual camera on the back, which has a telephoto lens and a wide-angle lens that gets you optical zoom up to 2x and some different photo effects, with portrait mode where it blurs the background and focuses on the forefront of the scene,” Slivka says.

ONLY WANT A BETTER CAMERA? PICK THE 8 PLUS
“As far as the rear camera goes, the iPhone X will be pretty similar to what you get in the 8 Plus,” says Slivka. “They are both 12 megapixel cameras, and they are going to have the same software features, the same filters and the same three tone flash with vivid colors and portrait mode with a 2 x optical zone.”

…UNLESS YOU’RE INTO 3D AND EMOJIS
The front camera on the X is about getting better tech than the back camera. “The major advantage is going to be the front camera since it is using the true-depth camera with the front visual camera where you get the same portrait mode, blurred background and portrait lighting in the front,” says Slivka. “You can apply these features even after you take the picture.”

If you haven’t heard, the prominent feature Apple is pushing is its animated emojis, which will come to life with this front camera and its facial recognition software. “You’ll have animated emojis in 3D where you can record a clip of yourself and superimpose your face and muscle emotions on a unicorn, alien, poop emoji, whatever. Your voice will come up as well when you send the message, and it’s pretty accurate.”

IF YOU’RE INTO SECURITY, THIS MIGHT BE THE PHONE FOR YOU
Forget the fingerprint sensor; the iPhone X is about to change the way we access our personal information with facial recognition technology. “The iPhone X is going with face ID, which is a new facial recognition software and it uses infrared light to scan the user’s face and a sensor that develops a 3D map,” explains Slivka. “Most reports are saying its even more secure than touch ID. The chances of someone matching your face are low unless you’re an identical twin.”

There is a passcode as always, and you can opt out of the facial recognition software. But this is the future. If you’re nervous about Big Brother, Slivka dismisses that fear pretty quickly. “All this happens on the device, and none of this gets sent back to Apple,” he says. “It’s not sending that data off anywhere except being stored on your phone.” Right.

THE NEW OLED DISPLAY IS PERFECT FOR GAMERS AND STREAMERS
Even though Android cashed in on OLED display technology before Apple, it’s a big deal they included this screen in the iPhone X. “The main difference between LCD and OLED is LCD has a light that shines through the screen, and you see the pixels, and you never see true blacks. OLED gives you a higher contrast ratio between blacks and the brightest colors, and not a whole plain of a backlight which allows it to have smaller, thinner display. I think it’s going to be better for gaming uses and watching movies.”

There’s also going to be the addition of HDR display, which allows more vivid colors to show up on the display of the X. Slivka points out this tech might be the reason why the phone is so expensive as OLED screens aren’t cheap to mass manufacture.

IT’S GOING TO BE EXPENSIVE TO FIX Speaking of that OLED display, the back of your iPhone X is going to be edge-to-edge-glass and look noticeably different. “It’s going to be a different look if you’re used to the aluminum back,” says Slivka. It has a slight color as well underneath the glass.“

We can hear your inaudible sigh. Per our reporting this week, the glossy OLED screen could set you back $279 to fix a cracked screen, which is a significant hike from what it costs to fix a shattered 7 and 8 Plus ($169) and for the 7 and 8 ($149). Any damage beyond the glass and you’re paying for the cost of a brand new iPhone 6s. Cool.

WIRELESS CHARGING COMES WITH THIS UPGRADE
So you’re probably going to smash that glass at least one night out. Does the fact that the glass allows energy to be transmitted through it so it can wirelessly charge lessen the blow? “Apple has introduced wireless charging with the X where it requires you have to have a charging pad,” says Slivka. “The metal backs are changing, and now it is a glass black that allows the energy to be transmitted better for charging.”

Slivka mentions Airpower, Apple’s wireless charging matt, could come out within the next year. “This is a larger mat where you can charge all of your Apple products all at once. The charging status for all of them will show up on your phone.”

OUR CALL: IT’S OKAY TO WAIT ON THIS ONE
If you can live with not having the newest, shiniest Apple product, Slivka advises to wait a year. “It’s next year’s phone this year,” he says. “It has that price premium. Apple is pushing the limits to produce this, so the supply is low and the components are expensive. That’s why the price is up. If you can wait until next year, you’ll get the same phone when the supply is better and the hiccups get worked out.”

In the end, it may come down to whether you can wait a year to send an animated poop emoji.