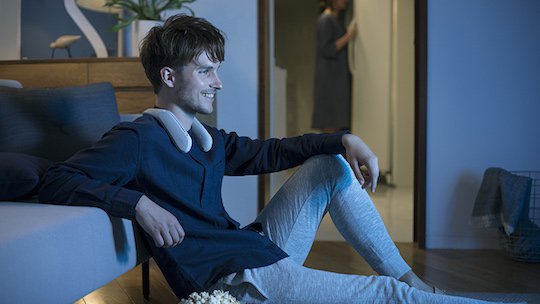 There isn’t a ton of technology that revolves around the neck. You have the neck pillow, which exists to make sleeping on airplanes a slightly more comfortable experience than snoozing on a bed of nails. But after that it’s slim pickings, besides the $15 neck massager from The Sharper Image that you got for Christmas in 2004.

I’m not saying Sony saw this glaring hole in the neck market when it unveiled its new wearable neck speaker, the SRS-WS1. Clearly the company wanted to build a speaker first, and a neck gadget second. But even though the device may transform the way you experience sound, it has definitely changed the whole damn neck game.

The crux of the SRS-WS1 is simple: You know how you usually put your speakers on the floor, or on a bookshelf, or next to your TV? Now you wear ‘em around your neck. The SRS-WS1 contains two wireless 30mm integrated speakers, which vibrate while delivering booming sound.

According to Design Boom, the vibrations and the sound hit your ears at once, which makes you feel like you’re smack dab in the middle of whatever you’re watching. (In this demo video, watch a dude calmly test out the speakers during a screening of Spider-Man: Homecoming while ostensibly having his ears and mind friggin’ blown.)

Above all else, the SRS-WS1 is ergonomically sound. Engineers designed its arch shape and cushions to fit comfortably on your shoulder and collarbone for long binge-watching sessions. It can be used nonstop for seven hours, which should get you through most of the new season of Stranger Things before you have to recharge.

Right now the SRS-WS1 is only available in Japan for $500, but hopefully it won’t be long until the rest of the world can enjoy the fruits of the neck speaker revolution.