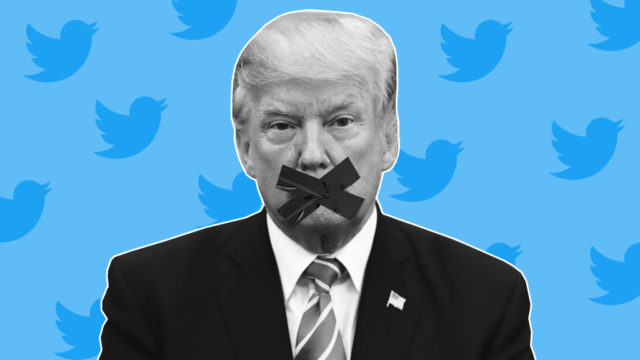 President Donald Trump, or @realDonaldTrump, as he’s better known on the Internet, is a pretty terrible Twitter follow for a variety of reasons: He retweets racists, fires off typos in the middle of the night, talks shit about the NFL, talks shit about Puerto Rico even when Puerto Rico is in total shambles, talks shit about Hillary Clinton even though he won the election, and oh yeah, occasionally teases nuclear war with North Korea.

That last unsavory behavior might be enough to warrant a swift ban from Twitter, but as with most matters pertaining to our president, it’s a bit complicated. Let’s take Trump’s tweet from August 11, in which he casually warned Kim Jong-un to cut it out with the whole nuclear testing thing:

Or this one from September 23, in which Trump tries out a fun new nickname on the dictator who may destroy us all if provoked enough:

Twitter users have pointed out that tweets like these are in direct violation of the social media site’s terms of service, which bans users from harassing “individuals or groups of people with violent threats.” (Sadly, we couldn’t find any language in the TOS that prohibits the use of “Little Rocket Man.”) So, why hasn’t Twitter given the leader of the free world the boot? Well, because he’s the leader of the free world.

Yesterday, Twitter took to its @Policy account to clarify that Trump is exempt from any bans because, as a very public figure, all of his tweets are newsworthy, no matter how awful and threatening they may be. And it’s Twitter’s duty to “keep people informed about what’s happening in the world,” even if what’s happening in the world is a too-big-for-his-britches megalomaniac potentially inciting nuclear war in 140 characters. Here, I’ll let the powers that be explain: