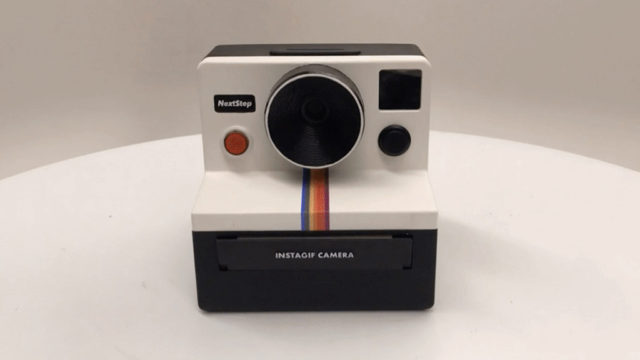 You don’t hear much about the classic Polaroid instant camera anymore, which is living out its retirement on a nice piece of property upstate. The advent of digital cameras and smartphones effectively rendered the camera obsolete decades ago, but that hasn’t stopped its parent company from occasionally trying out modern spins on the old technology. My favorite recent Polaroid offering is the ZIP Mobile Photo Printer: You snap Insta-worthy photos and instantly print two-by-three-inch, full-color prints from the pocket-sized device.

The ZIP is very cool and a hit at parties, but it’s got nothing on the latest (unaffiliated) Polaroid invention. Redditor Abhishek Singh recently unveiled his “Instagif,” a camera that automatically spits out an LCD cartridge of your recently recorded GIF. As The Verge points out, Singh even programmed the GIF to slowly fade in like an old Polaroid photo.

So how did Singh build a device that lets you literally hold a GIF in your hand? While he outlined the entire process in an Imgur album (and posted all the code on GitHub), he modeled the gadget in Autodesk Fusion 360, 3-D printed it himself, and used a Raspberry Pi interface for the camera and cartridge.

The whole thing is worth a read, if for no other reason than to remind you there are much more productive ways to spend your free time than angrily refreshing your Twitter feed. I only understand about nine percent of the steps Singh took to make this gloriously unnecessary thing, but I respect the hell out of him for doing it.

Singh also revealed every single raw material you need to construct an Instagif of your own, including jumper wires, a soldering iron, X-Acto knives, resistors, neodymium magnets, and an iPhone lens. It’s basically the setup to a MacGruber sketch. I hope Polaroid pays him a million dollars for it.