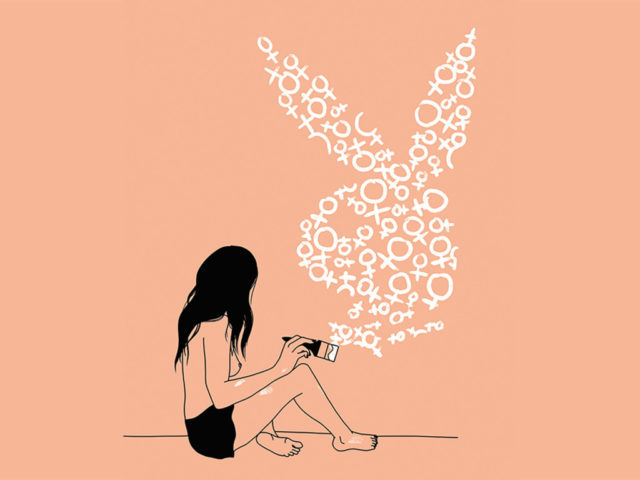 Feminism. Like love, the word holds a lot of different meanings to a lot of different people. At first glance, feminism has a simple definition—advocating women’s rights and equality between the sexes—and yet it still carries a lingering undertone, prompting as much debate today as it has over the past century. Along the way, playboy has been both a defender of the movement and, depending on whom you ask, its enemy.

The relationship between playboy and feminism began during the latter’s second wave. Having secured the right to vote with the ratification of the 19th Amendment in 1920, American women started taking aim at social as well as political targets after World War II. An American renaissance was afoot as the country drove into the 1950s, promoting a national conversation about sexual mores and gender roles. This shift in mind-set, which unfurled over the next two decades, ushered in a cultural and societal revolution. Above all, the second wave challenged the place of women in a society that expected them to serve as docile housewives and not own their sexuality.

playboy occupied an overlapping space, using its pages to explore the curiosities of sex, champion the rights of the individual and redefine what it meant to be an unapologetic critical thinker, while celebrating pleasure. Our pictorials didn’t just scare religious radicals; they also disturbed and offended many feminists. It became common practice in many feminist circles to equate playboy with the regressive male gatekeepers of the United States who insisted that women weren’t entitled to subjectivity—or, for that matter, their own sexual objectivity.

In 1963, freelance journalist and future feminist icon Gloria Steinem authored a popular piece for Show magazine outlining her point of view on the negative work environment at one of the Playboy Clubs. Although the internet wasn’t around at the time, stating the article went viral would be an appropriate comparison today. Among her findings was that the Bunny Manual, a guide for all new hires, contained reminders that there are “many pleasing means [the waitresses] can employ to stimulate the Club’s liquor volume.” In the ensuing national debate, it became clear that the target was shifting from the ballot box to the bedroom.

Half a century later, as we navigate the current wave of feminism in real time, we find ourselves in a bit of a gray area. Many of today’s feminist influencers, including Beyoncé, Ellen DeGeneres and Lena Dunham, have celebrated playboy while honoring the work of pioneering feminists like Steinem. If cultural heavyweights like these can balance both philosophies in their minds, then the question arises again: What is feminism?

To us, the answer is simple. It’s the right for one to freely choose the life she wants to live.

The problem is less about the definition of feminism and more about how we interpret sex today. Throughout the 1960s and 1970s Steinem and other feminists made necessary arguments for the time, often targeting playboy in the process. They stood up and announced that women were, are and always will be more than sex objects. Setting aside the fact that we’ve made that same point continually for nearly 64 years, playboy pointed out a fallacy that often accompanies this line of thought: that sex itself is the enemy. To us, that perception is an exact contradiction of what feminism is and indicates a detachment from healthy human desires.

I’m reminded of a point my dad made in Esquire back in 2002:

“Women are the major beneficiary of the sexual revolution. It permitted them to be natural sexual beings, as men are. That’s where feminism should have been all along. Unfortunately, within feminism, there has been a puritan, prohibitionist element that is antisexual.”

While much of this rings true, I disagree with his main assertion here. We are all equal beneficiaries of the sexual revolution, because it allowed both men and women to state, in a collective voice, we all like sex.

Every intelligent man and woman should desire to be a sex object. Demonizing that desire denies an essential component of what makes us human, of what allows us to connect on a level that is oftentimes challenging to articulate in words—of what permits our very existence. Simply put, conscious and consensual objectification of self and other is what keeps the world going round.

There will be other waves, and we will participate in those too. But as we continue to ride this one, it is clear as day that playboy’s Philosophy today as well as tomorrow is as feminist as it gets.